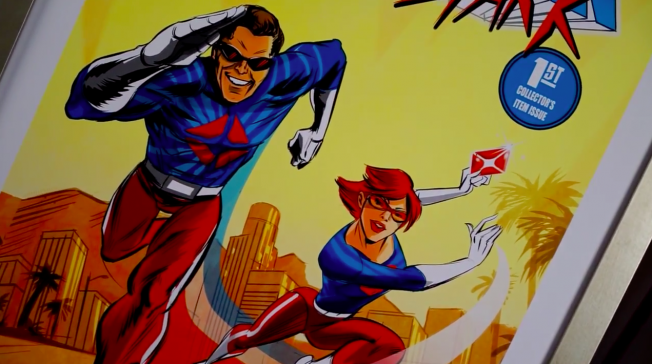 In an unusual promotion, ARCO surprised its biggest fan—yes, retail gas-station brands have fans, too—with a gift that clearly meant the world to him and his girlfriend.

It all began when ARCO agency RPA in Santa Monica, Calif., noticed Alfredo Garcia posting numerous selfies from ARCO stations on social media. They soon realized they’d discovered a bonafide superfan. Intrigued by Garcia’s brand love and backstory (the former Air Force lieutenant colonel runs marathons and loves comic books and cosplay), the agency decided to acknowledge him in a special way. And it didn’t hurt that Garcia is a natural in front of the camera.

Steve Curcuru of 310 Artists, who writes and illustrates his own comics, created the gift based on images of Garcia and his girlfriend, Idalia Mejia, found online.

What was Garcia’s reaction when ARCO surprised him with the gift?

“The sight of the poster-size comic-book cover gave me goose bumps!” he tells AdFreak. “The geek inside of me was saying, ‘Awesome sauce! My very own superhero character!’ ”

How did he get to be an ARCO fan in the first place?

“My Tacoma has 125,000 miles on it, and most all of it has been with ARCO gas because it always had the lowest prices in the neighborhood,” he says. “One day I decided to take a selfie putting in ARCO gas at a local station. Well, I wanted to share the prices with friends, so I started taking more selfies or just pics of the prices and sharing them.”

The timing of “ARCOMAN” coincided with last weekend’s Comic-Con in Long Beach, which Garcia and Mejia attended, but RPA claims there was no specific brief to tie in with the convention. This was just a feel-good one-off, which ARCO is promoting across social with a time-lapse video of the artwork’s creation and a behind-the-scenes clip that shows Garcia being presented with the cover.

Garcia has followed comic-book superheroes for years—Green Lantern and the Avengers are his favorites—but never thought he’d be one himself. “What self-respecting geek would not like to be a superhero?” he says. “One of the reasons we cosplay is to emulate our superheroes, and now that I am my own superhero, I am unique!”
On the downside, after all this publicity, everyone will know the true identities of ARCOMAN and the Red Spark. How will they fight the forces of injustice—and presumably keep OPEC from raising oil prices—now?

“Identity known or not, we will fight evil in or out of costume,” Garcia says. “It’s just what superheroes do.”